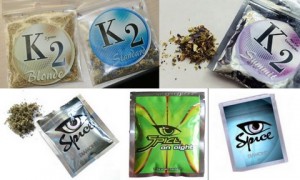 is the third most commonly abused drug by high school seniors, behind marijuana and prescription drugs, according to a 2011 study funded by the National Institute on Drug Abuse. This can be attributed to its formal legal standing, and the ease in which it can be purchased

Side effects include violent seizures, dangerously elevated heart rates, and hallucinations, according to the institute and the U.S. Drug Enforcement Administration. The product looks more like Potpourri than classic marijuana and comes in distinctive packaging. The very nature of the product makes it more dangerous than typical marijuana.

The drug will now be considered a controlled dangerous substance, like cocaine and heroin. Violators could face three to five years in prison and a fine of up to $25,000.The drug is on the national and state radar now as it has become popular topic in the media. For these reasons, we can expect to see a crackdown on synthetic marjiuana and more arrests in the coming months and years.

Have you or someone you know been arrested or charged with possession of synthetic marijuana or any drug?  Please do not hesitate to call Corey P. Morano, Esq. at 201-598-5019 or email me directly at newjerseylawyernow@gmail.com for a free consultation.

What are the New Jersey Point Violations? A List of all New Jersey Tickets with Points that can Raise Insurance Rates